Black Magic German Shepherds
Family Tree
Let's talk about pedigrees:   AMERICAN DOGS vs GERMAN DOGS
Here's a question we get asked a lot - are your dogs American or German lines? When people ask that question, what is it they really want to know?   Most of the time, folks have an idea that one or the other typifies what they want in a dog.  Here's what we hear:  American (or German) dogs have sloping hips.German (or American) dogs have aggressive temperaments. Which is it? If you really study the breed you will find that there are good dogs in both of those lines.What you need to know is this: German dogs are bred for SCH which means they are bred to have low frustration levels and bark a LOT.   American show dogs are bred for sloping toplines, not intelligence or athletic ability.     The best dogs, we believe, are the old-fashioned German Shepherd dogs of the 1970s. They were big, athletic dogs with straight backs (no sloping toplines!) that were intelligent, faithful, natural guardians.  That's the type of dog we are still breeding  - good old fashioned German Shepherd pups.
The pups you buy from us now are seventh generation.... that means we owned and bred all the way back seven generations of males and females. We have done all we can to breed only the best qualities, in our quest to preserve the classic, old-fashioned German Shepherd.  Our original dogs were a mix of German AND American lines - they were great dogs who proved they could throw pups as good or better than themselves.
We'll start with an example of one of our present day female breeding dogs.
Under that are photos of some of our original dogs.  Enjoy!
Black Magic's Sweet Sasha
Sasha's dam is Black Magic's Kissimmee
Black Magic Kissimmee's dam is Black Magic's Bella
Black Magic Bella's dam is Black Magic's Daisy
Black Magic Daisy's dam is  Black Magic's Minime
Black Magic's Minime's dam is Black Magic's Good Karma
Black Magic's Good Karma's dam is  Black Magic's Sunday Sugar
Black Magic's Sunday Sugar's dam is Shelley Libby's Irish (Desdamona's Irish Cream). We were thrilled to meet Shelley and Irish so many years ago because Irish's pedigree has many dogs that our original lines had. For those folks who love to trace pedigrees, here are some of the famous dogs in Irish's pedigree.Irish's sire goes back to ACH Rohann's Reaction, ROM; AGV, ACH Schokrest on Parade, ROM; ACCH Stuttgart's Sundance Kid, ROM and many, many more famous American Champions, back when the breed was great.  Her dam has an equally stellar pedigree full of dogs like these: ACH Vax VD Wienerau, SCH III, FH; ACH Copper Canyon's Valor of Nyack, ACD; Axel VD Hattsteinburg, SCH111, FH and Casar V. Arminius, SCH111, FH.    So if you have studied the old bloodlines you know that this bitch was out of a mix of the best of American and German bloodlines. Dogs that were highly intelligent, had great conformation, and the ability and desire to work. Titled in conformation, protection and tracking.
Irish was Sunday Sugar's dam. Sunday had Karma, Karma had Minime, Minime had Daisy
Daisy had Bella, Bella had Kissimmee, Kissimmee had Sasha .......7 generations!  And this year Sasha will produce our eighth generation of great Black Magic dogs. Bravo, our newest stud dog! 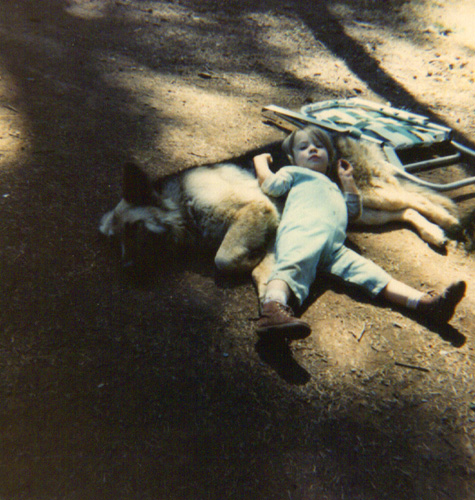 1978
Our daughter Sarah naps on her first German Shepherd, Shawna

2006
Sarah
and
her dog,
Black
Magic's
Ali
college
graduation
day!
We've been breeding fine quality German Shepherds since 1976. For 40 years we've bred for the same type, temperament, health and size of dog.  Our lines have been refined and carefully bred to bring you some of the best GSD in the U.S., all bred to be FAMILY dogs. Many have excelled in obedience, therapy, and search and rescue, as well.

Black Magic's Leo
Leo sired many wonderful dogs for us,  including Elijah, California Dreaming, Daisy, Maxi, and so many more. He had a great temperament and was a gorgeous dog. 122lbs and  OFA good.
Karma is a BIG girl, 110 lbs.lean. She is an exceptional family guardian; faithful, calm and ready to do whatever you ask.
Minime  108 lbs at age 9 - She's a fabulous dog, loyal, brave and smart!  Loves her cats....
1

Black Magic's Laddy
We imported Laddy from a friend in Scotland
to have a good outcross. He is a year old here. Laddy built up nicely and produces lovely pups. He's Bella's sire and is related to Max (Sprague's Maximum Ride).
OFA good 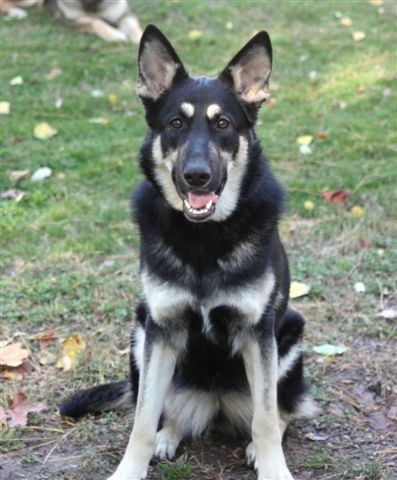 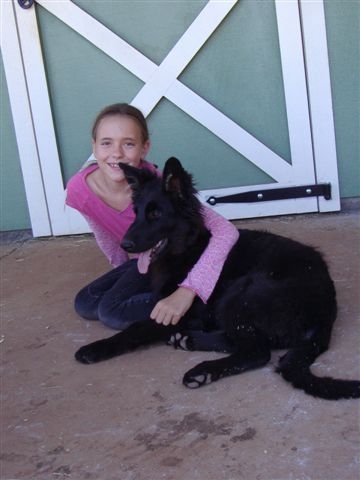 Black Magic's Sasha - our seventh generation female to carry on the Black Magic line! Pictured here at 4 months of age.
(Her sire is Irael's Lion of Judah, OFA fair, who is a grandson of Israel's Prophet of PST, a son of Black Magic's Leo and Black Magic's Good Karma) 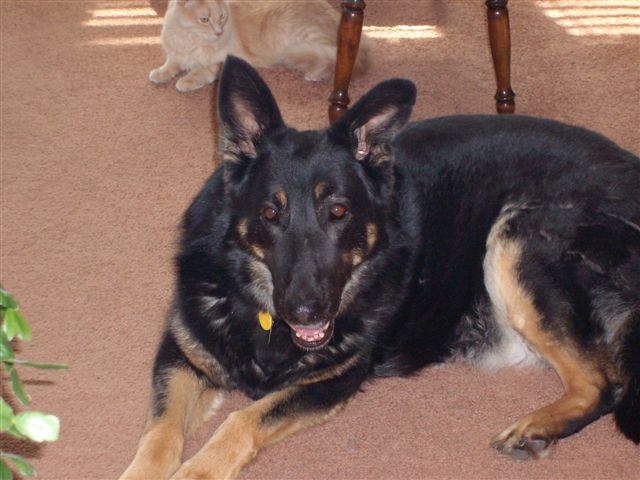 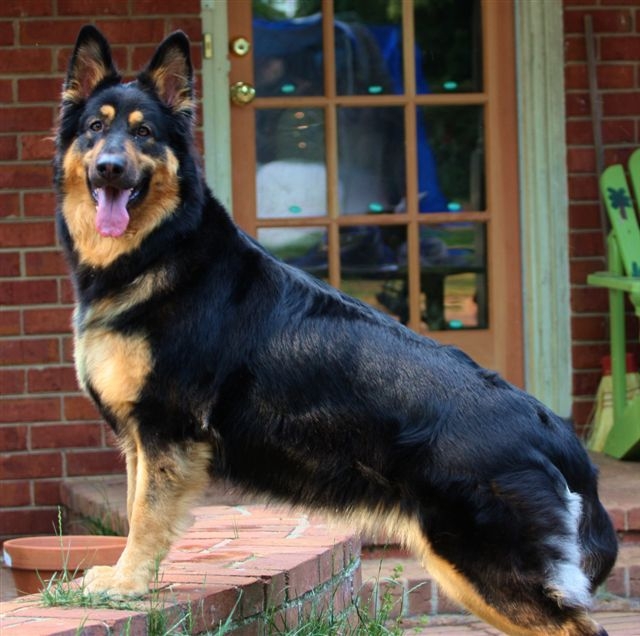 To see Black Magic dogs in your pedigrees, click here